"... the 1920s were marked in Australia by bitter social tensions and intermittent industrial conflict which put the arbitration system under great strain and produced much litigation. But in Menzies' case a close concern with the legal problems created by these troubles was to have a special significance: indirectly it became one of the major influences which drew him into active politics."
A W Martin, Robert Menzies A Life Vol 1 1894-1943, 1993 p 46. 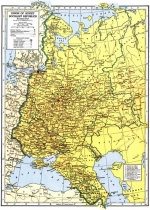