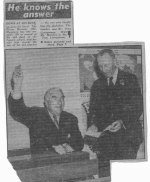 "He knows the answer
Down at his desk, up goes his hand, the Prime Minister, Mr Menzies, has the answer. He is seated at his old desk at the Jeparit school, and beside him stands the son of his old teacher - the one who taught him the alphabet. The teacher was Mr John Livingstone. With Mr Menzies is Mr Tom Livingstone."

"The Bushmen's Corps sailed yesterday [from Adelaide] for the Boer War ... The crowd was tremendous, and the troopers had their work cut out to make room for the troops. Soon they came, amid deafening cheering and shouting, the wild untrained horses waltzing along in the most unmilitary fashion, doing quite a lot of damage in the crowd. One man and horse came all the length of the street tail first, he got so mixed up and terrified with the band and the row. Some bucked, some kicked, some reared, some waltzed, but in every case the man seemed part of the horse, and such fine men and lovely horses." Maisie, Her life in her letters from 1898 to 1902, ed J Kyffin Willington, 1992 p 304-5.