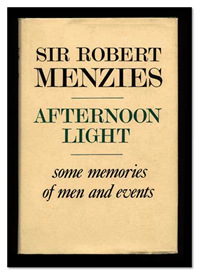 "My father, James Menzies, was a strongly built man of little more than medium height. His hair was prematurely grey, and became a splendid silver. He had a fairly full moustache, in which he took some pride. The nervous tension which he had tended to make him both dogmatic and intolerant; in a very modified sense, a 'Barrett of Wimpole Street'. His temper was quick. We, his sons, got to know that 'whom the Lord loveth, he chasteneth'. We were not a little frightened of him, and found our regular refuge in the embracing arms of our mother who afforded us the comfort of her own understanding, balance, and exquisite humour."

"My mother was, in the most remarkable way, father's complement. They were each quite different, but together one. Where he was explosively intolerant, she was calm, human and understanding and in the end, with patience, would secure a victory for sweet reasonableness."

"… the practice of the law in court was and remains my first love. A large practice at the Bar means much concentrated and hard work. For some years before I took silk at the age of thirty-four, and for some years thereafter, my weekly hours of work would average not less than eighty. Either in court or in his Chambers, the advocate must never lose his concentration upon the job in hand."

1926 - on British Commonwealth of Nations:

"By the time of the First World War, Australia, South Africa, and New Zealand had been added to Canada as completely self-governing 'Dominions', as they were soon to be called. Each of them participated in the First World War with unstinted patriotism and sacrifice.

… These Dominions were to be 'within the British Empire', and were to constitute 'the British Commonwealth of Nations'.
So defined, this was the British Commonwealth at the time at which I became involved in politics. For many years after I went to Canberra, I could and did speak of it with emotion. For it was something in the blood; it connoted a common allegiance, and a great brotherhood."

1927 - on Menzies' intention to stand in the State election:

"When ... I called on him [Owen Dixon] to tell him that I was about to stand for Parliament, he delivered a quick judgement. 'Well, Menzies, it is probably easy to convert a good lawyer into a good politician; but re-conversion is impossible."

"I shall never forget the incident which provoked the ultimate crisis, for I saw it all. … Suddenly Jardine signalled to Larwood and swung the field to the bodyline setting. It was almost as if he had said - 'This man [Woodfull who had just been struck over the heart and had fallen to the ground] is a bit groggy; let's dispose of him!' A roar of rage went up from 40,000 spectators. If it had been Sydney or Melbourne, I believe, … the crowd would have invaded the ground and the Test Match might have ended in tumult and disorder.

What happened thereafter is a part of cricket history; angry cables were exchanged; there was much bad feeling; all pleasure went out of the series. Jardine's action was a blunder of the first magnitude. He had in effect announced that 'bodyline' was designed as a physical attack; no more and no less. Many years afterwards, he conceded to me that he would like those five minutes over again!"