"Certainly, people began gathering outside the church at noon, and by the time Heather and her father arrived for the service at 2.30, barricades had been erected and police were on duty in a scene reminiscent of many during the royal tour a year before. A crowd estimated at about 2000 watched as two Scottish pipers in Royal Stewart kilts piped the car from the entrance to the church steps, and cheered and shouted good wishes which momentarily brought tears to the bride's eyes. Hector Harrison, permanent officiating clergyman at St Andrew's, and Fred McKay, Menzies' new-found friend from Alice Springs, conducted the service. After the reception groomsmen, in somewhat hilarious mood, carried the couple shoulder high through the crowd to their car to leave for the honeymoon."
A W Martin, Robert Menzies A Life Vol 2 1944-1978, 1999 p305. 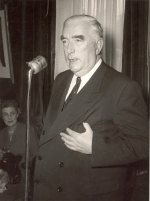