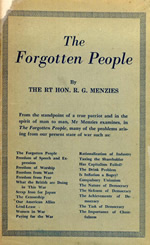 “The broadcast essays in this volume were delivered weekly during 1942. Some of them deal with matters of permanent interest while others are dated by passing events. They have represented a serious attempt to clarify my own mind and assist listeners on questions which emerge in the changing currents of war. In a sense, within the acute limits of time and space, they represent a summarized political philosophy to which many thousands have been interested enough to listen and which hundreds of listeners-in have asked me to publish.

“It should perhaps be stated that their preparation and delivery have been a purely voluntary contribution on my part to the solution of contemporary problems. I am indebted to Station 2UE, Sydney, and its associated stations in Victoria and Queensland, for their courtesy in enabling this to be done; and to Messrs Robertson and Mullens Ltd of Melbourne for having published and circulated at their own cost the broadcast “The Forgotten People”, which gives its name to this book.”