HomeBooksThe Measure of the Years 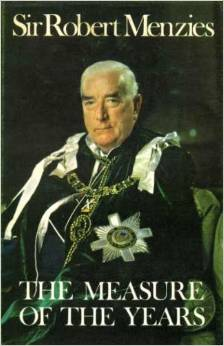 The Measure of the Years contains the reminiscences of the most distinguished and best-loved Commonwealth statesman.

The record of those eighteen years, during which he presided over the making of modern Australia, is the heart of this book. Sir Robert provides an enlightening account of Australia's role in the development of South-East Asia; of the vital ANZUS treaty with New Zealand and the United States, the keystone of the new Pacific structure and a forerunner of SEATO; and of the burying of the hatchet with Japan.

He records wide reforms in economic policy and the social services; most fascinating of all, he tells the inside story of the Petrov spy scandal, cause of unprecedented Parliamentary scenes at the time and of bizarre rumours since.

With final chapters on Sir Robert's two great loves, the law and cricket, The Measure of the Years is what its author would modestly call a 'patchwork' – that is, a treasure house of wit, wisdom and humour.