"Like you Americans, we Australians like to lead a life of our own ... but this war is not about the politics of Europe but the politics of the human race."
Mr Menzies makes this remark to a circle of newspapermen on his arrival in New York.

PRIME MINISTER MENZIES SPEAKING TO THE PRESS ON HIS RETURN FROM WARTIME ENGLAND:

"I come back to Australia with just one sick feeling in my heart and that is that I must now come back to my own country and play politics.

I think that it's a diabolical thing that anybody should have to come back and play politics - however cleanly, however friendly - at a time like this." 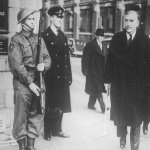 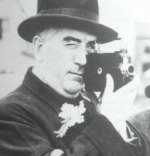 Sail on, O Ship of State! (Click to view) 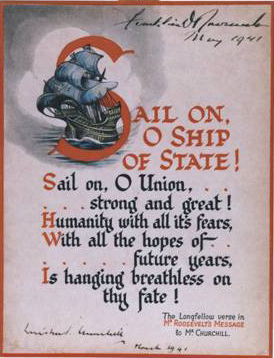 "Roosevelt ... agreed that we all ought to tell Japan where she gets off, but ... stops short of actually instructing the USA Ambassador to do so.  I am left in no doubt (without words) that America will not stand by & see Australia attacked. ... R. is a little jealous of Winston's place in the centre of the picture. I tell him they should have a meeting." (Robert Menzies, Diary 1941)

The Longfellow broadsheet of 1941 foretold Winston Churchill and President Franklin Roosevelt's dramatic secret meeting off the coast of Newfoundland.  Roosevelt used the verse as a hastily scribbled message of support to Churchill in early 1941, when American entry into the war seemed remote.  Churchill had it printed, and both he and Roosevelt signed a few copies on the last day of their meeting in August 1941.  Menzies collected Roosevelt's signature earlier, on his journey back to Australia.  At their meeting Churchill and Roosevelt drafted the Atlantic Charter, the agreement on war aims which was to be the basis of the enduring Anglo-American alliance.

Only four other signed copies are known to exist.