"I remember vividly the school ... It was built of wood. It stood on a little sandy rise between the township and the river. There were, in my time, about thirty pupils ... At least a dozen of the pupils walked three or four miles in from their parents' farms. 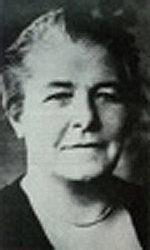 "I became, over a few years, a sort of infant prodigy; a purely comparative term. The reason was not far to seek. My parents were both great readers. I grew up on a fascinating melange of books."
Sir Robert Menzies, Afternoon Light, 1967 p 9.

... the first liberal democracy in the world to result from a democratic vote of the people, unpressured by external threat or internal coercion. ... The legislative agenda outlined in the first speech by the Governor-General concentrated on practical tasks: setting up a High Court, adopting adult suffrage, creating a national industrial relations system and planning for the old-age pension.
M Gordon, The Age, 9 May 2001.

Tuesday: 22 January 1901
We have just had very dreadful news, which I suppose reached you before us. I mean the death of our dear old Queen. She died at 6.30 this evening, and at 7.30 up here in Halifax boys were shouting the news in the street and selling papers. Isn't it a too dreadful thing. Nothing could describe the awful gloom over everything yesterday and today. ... I would give almost anything to be in London tonight - fancy hearing St Paul's tolling. The Queen's death will touch everything and everybody, and all things will be different. Every mortal thing here is put off, some postponed and some abandoned. This year will be absolutely dead in every way. I don't suppose a single thing will take place for months. I can't tell you how awestricken all England seems to be. Maisie, Her life in her letters from 1989 to 1902, 1992 p 374-6.

"This evening Guglielmo Marconi announced the most extraordinary scientific conquest of our times."