"My father, James Menzies, was a strongly built man of little more than medium height. His hair was prematurely grey, and became a splendid silver. He had a fairly full moustache, in which he took some pride. The nervous tension which he had tended to make him both dogmatic and intolerant; in a very modified sense, a 'Barrett of Wimpole Street'. His temper was quick. We, his sons, got to know that 'whom the Lord loveth, he chasteneth'. We were not a little frightened of him, and found our regular refuge in the embracing arms of our mother who afforded us the comfort of her own understanding, balance, and exquisite humour."
Sir Robert Menzies, Afternoon Light, 1967 p 9. 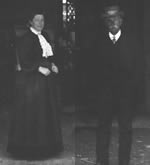 "My mother was, in the most remarkable way, father's complement. They were each quite different, but together one. Where he was explosively intolerant, she was calm, human and understanding and in the end, with patience, would secure a victory for sweet reasonableness."
Sir Robert Menzies, Afternoon Light, 1967 p 12.